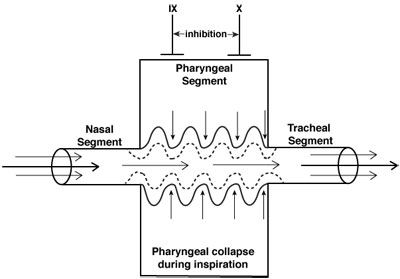 Neuromuscular control of the upper airway (CN IX and X) is inhibited to a greater degree than diaphragmatic activity (phrenic nerve) during sedation/anesthesia. Thus, the negative inspiratory pressures that develop with diaphragmatic contraction may reduce the diameter of the pharynx, a collapsible segment between two relatively well-supported structures, the nasal passage and the trachea. These areas typically involve narrowing of the anterior-posterior distance between the posterior pharynx and the soft palate, epiglottis, and, to a lesser degree, the base of the tongue. Consequently, the pharyngeal segment functions as a Starling resistor, a collapsible tube whose caliber is influenced by pressures within the lumen of the airway and soft tissue.

Airway obstruction during moderate or deep sedation occurs in the supraglottic structures due primarily to the soft palate and epiglottis falling back to the posterior pharynx. While it was previously thought that the base of the tongue was the primary cause of upper airway obstruction during unconsciousness, MRI studies of the airway in sedated children demonstrate that the soft palate and epiglottis are the most likely structures causing the obstruction.

The keys to appropriately managing the pediatric airway during sedation are proper airway positioning and application of positive pressure ventilation when required. Routine management of the pediatric airway includes placement of the patient’s neck in the sniffing position, often with a rolled towel placed underneath the shoulders and administration of “blow-by” oxygen. If obstruction persists despite these maneuvers, the patient’s airway should be repositioned and a chin lift performed to move the supraglottic soft tissue structures, primarily soft palate and epiglottis, anteriorly and away from the posterior pharynx. If a simple chin lift fails to relieve the obstruction, this should be followed by a jaw thrust and application of positive pressure through a flow-inflating anesthesia bag and mask. Failure to relieve the obstruction following application of positive pressure (PEEP) requires positive pressure ventilation with cricoid pressure and endotracheal intubation when necessary. 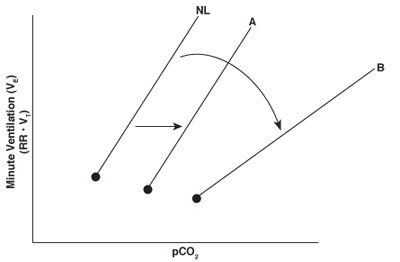