See: Standards of Care for Appropriate Cardiorespiratory Monitoring per Level of Sedation

Pulse oximetry must be applied to all children undergoing moderate to deep sedation. Note that pulse oximeters assess oxygenation and do not evaluate carbon dioxide elimination. Oxygen saturations ≤90% are generally considered clinically significant, and in the sedated patient without underlying lung disease indicate significant hypoventilation. A characteristic arterial blood gas in the presence of hypoventilation and no supplemental oxygen reveals hypoxemia and hypercarbia. Since pulse oximetry requires pulsatile blood flow to determine oxygen saturation, pulse oximeters vary in accuracy and strength signal in the presence of poorly perfused tissues. Low or absent pulse signals will occur under these circumstances. Similarly, when the patient is actively moving, the pulse oximeter may have difficulty distinguishing pulsatile tissue beds from movement-induced artifact. There may be a delay between change in oxygen saturation and its detection by a pulse oximeter. Thus, evidence of oxygen desaturation by pulse oximetry gives a comparatively late warning of hypoxia. Placement of the pulse oximeter probe in a more central location may reduce the delay in the determination of oxygen desaturation. 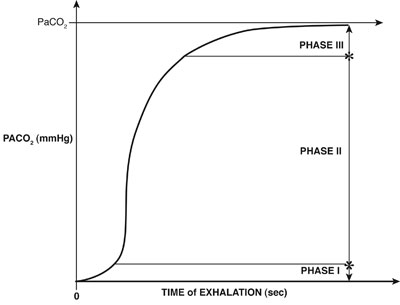 Capnography is a noninvasive monitoring tool that measures CO2 concentration in exhaled gas, displayed continuously as a wave form through the respiratory cycle. Typically, this measurement is made using infrared light absorption based on the concept that CO2 strongly absorbs infrared light with a wavelength of 4280 µm. CO2 during expiration is typically divided into three phases (see figure below). During the first phase, the CO2 concentration is low, reflecting the anatomical dead space in the trachea and large bronchi that are free of carbon dioxide. In Phase II, there is a rapid rise in carbon dioxide as alveolar gas begins to mix with dead-space gas. During Phase III, more and more of the alveoli empty and CO2 concentration rises rapidly until a plateau level occurs, reflecting virtually all alveolar gas. Following Phase III, inspiration begins and CO2 drops abruptly. The end tidal CO2 concentration is the point just before inspiratory effort is initiated. Under normal conditions, the end tidal CO2 is usually slightly less than the PaCO2, with a normal difference of 2–5 mm/Hg. Note that this gradient may be considerably higher in situations where there is an increase in dead space. During sedation, capnography is often used to assess the breath-to-breath analysis of carbon dioxide concentration. Capnography is particularly important in locations where the medical team may be distant from the patient (e.g., during an MRI scan). The most common cause of an elevated end tidal carbon dioxide level during sedation is hypoventilation. In this situation, the rising end tidal CO2 is accompanied by a rise in arterial CO2 while maintaining the normal EtCO2/PaCO2 gradient.