Despite decades of research into the pathophysiology of hypoxic-ischemic brain injury and neuroprotection, effective therapy remains elusive and our clinical role after such an injury is largely supportive. More frustrating is the number of promising therapies that are effective in cell culture and animal models, but have subsequently failed to demonstrate benefit in clinical trials. The heterogeneity of injury and physiology, and the uncertain therapeutic window, are barriers to the translation of neuroprotective interventions. Additionally, pediatric brain injury studies must account for age related differences in cerebro-vascular physiology and susceptibility to brain ischemia, requiring prohibitively large multicenter trials to assess clinical benefit.

In an effort to overcome these barriers to translating neuroprotective interventions, we use small animal MRI to identify biomarkers of injury and therapeutic effect in animal models of pediatric cerebral ischemia. A combination of real-time imaging, conventional longitudinal imaging, and rodent behavioral testing is used to comprehensively assess neurodevelopmental differences in the physiology of ischemia and reperfusion, and the response to neuroprotective interventions. We have worked closely with the Sun Lab on their investigation into the role of the sodium/ hydrogen membrane ion exchanger (NHE1) in cerebral ischemia. We recently used T2 and Diffusion Weighted MRI to establish that genetic and chemical inhibition of NHE1 is neuroprotective in a mouse model of transient focal cerebral ischemia. Additionally, this work suggests that the size of the lesion seen on Diffusion Weighted images may be used as a biomarker of neuroprotection as early as one hour after reperfusion.

By identifying MRI biomarkers in animal models of pediatric brain injury, we hope to provide a means for selecting the patients most likely to benefit from a particular neuroprotective intervention in subsequent clinical trials. Basing patient selection on the physiologic target of therapy rather than simply the disease state will reduce the sample size needed, increase the likelihood of observing a drug effect, and facilitate the translation of promising neuroprotective interventions into clinical use. 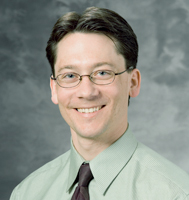