Dr. Michael Rock has had a long standing history of interest and participation in cystic fibrosis clinical trials. As a fellow from 1986 to 1989, Dr. Rock was fully involved in the randomized controlled trial of cystic fibrosis newborn screening. He became re-involved in this project when he returned to Madison as a faculty member in 1995.

Upon Dr. Rock’s return to Madison in 1995, he also became involved in multi-center clinical trials of new and existing therapies for patients with CF. Since then, Dr. Rock and the research team have been involved in studies of DNase in infants, azithromycin in patients chronically infected with Pseudomonas aeruginosa, BIIL-284, denufosol, inhaled hypertonic saline for infants, pancreatic enzyme studies, a new formulation of AquADEKs vitamins, ​CFTR modulators and studies of therapies for the eradication of new acquisition of Pseudomonas aeruginosa. Additionally, Dr. Rock conducted an investigator-initiated study of a new method of sweat testing, the CF Quantum® Test system. This technology showed promise in a multicenter study, and a larger trial of this will be conducted. 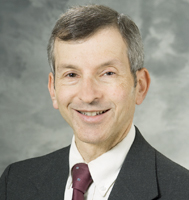