The major focus of the Smith Research Group is an intracellular stress response originating from the endoplasmic reticulum (ER) called the “Unfolded Protein Response” or “UPR”. The UPR has been implicated in such diverse processes as viral infection, cancer, neurodegenerative disease, autoimmune diseases, diabetes and cardiovascular disease. We have been most interested in understanding the immune consequences of UPR activation, specifically as it impacts inflammatory cytokine production. Macrophages undergoing a UPR produce greatly augmented type I IFN, TNF-α and IL-23 in response to infectious stimuli. The many interactions between UPR and immune signaling pathways and the resulting enhancement of immune responses suggest the UPR may serve as a “danger signal” immune amplifier.

Infectious agents, particularly those that invade cells to replicate, have developed multiple ways of dealing with the host UPR. The manipulation of host UPR by viral infections has been widely explored and continued to yield interesting surprises. Much less is known about how bacteria interface with the UPR. We have found that one human pathogen, Brucella species induces a massive disruption of ER structure (imaged by anti-calreticulin staining in red and B. melitensis in green in the figure) and triggers a full UPR. The UPR may affect multiple aspects of pathogenicity, including cytokine production, bacterial replication, host cell apoptosis, antigen presentation and memory. Currently it is not clear how Brucella manipulates the UPR to benefit infection while avoiding the negative repercussions of ER stress.

In my lab we have been investigating the intersection of UPR stress response and immune function through the lens of the host-pathogen interaction, using this model organism and others. 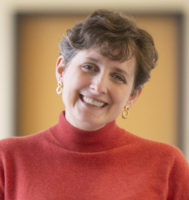