GVHD is a common complication and cause of mortality after allogeneic blood and marrow transplant (AlloBMT). T cells present in the donor stem cell graft can target antigens present on the leukemia, termed the graft-versus-leukemia (GVL) effect, resulting in clinical remissions and cures. Unfortunately T cells can also target host tissues that express minor histocompatibility antigens (mHAs) that are mismatched to the donor, leading to GVHD.

GVHD pathogenesis can be divided into distinct phases. Inflammation from the conditioning regimen activates antigen presenting cells (APCs) in the host expressing mHAs that are foreign to the donor prime and activate donor T cells. Cytokines stimulated by the inflammation, such as gamma interferon (IFNg), enhance this activation. Donor T cells proliferate in response to being exposed to foreign mHAs present on APCs, and attack host organs like liver, gut and skin.

The activated T cells can also produce further cytokines that exacerbate GVHD further. Because GVHD can be a life threatening complication, it is typically treated with immunosuppressant drugs for weeks to months. The paradox is that GVHD, and the current drugs used for treating GVHD, inhibit the function of the donor T cells – simultaneously abrogating GVL. Therefore while GVHD may be controlled, the leukemia relapses. If GVHD is not treated, T cells may be intact to cause GVL but GVHD eventually kills the patient. Thus clinicians often allow a small amount of GVHD to occur, to reap any concurrent GVL effect, but then treat GVHD as it worsens before it becomes uncontrollable and lethal. 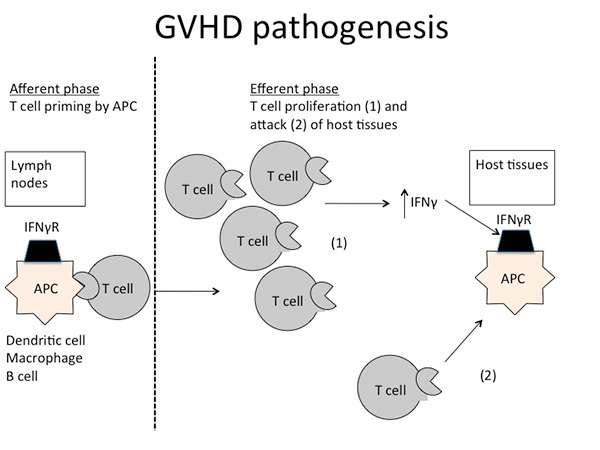 Thus, a paradigm shift in the field of alloHSCT is needed; namely prevention of GVHD while sparing the ability to maintain GVL. Our laboratory is focusing upon targeting non-T cell subsets to prevent GVHD while sparing T cells critical in mediating GVL. For example, Dr. Capitini has previously shown that

More recently, Dr. Capitini has shown that bone marrow deficient in STAT1, a downstream molecule of the interferon receptors, also prevents GVHD from delayed T cell infusions. Because of the availability of clinical grade JAK1/JAK2 tyrosine kinase inhibitors, these results could be rapidly translatable. 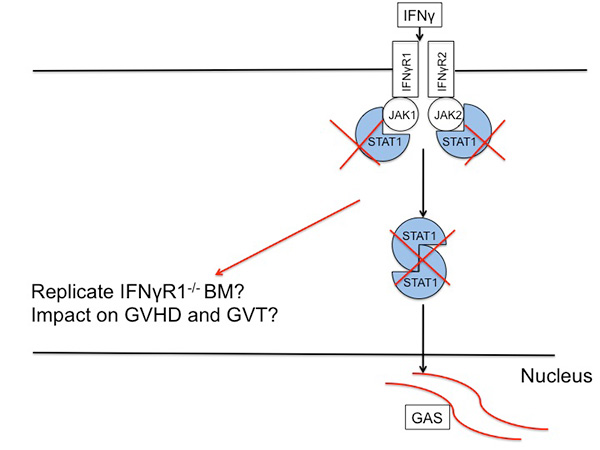