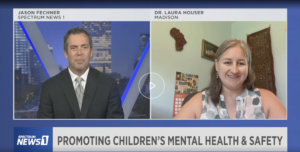 During Suicide Prevention Week, September 4–10, Laura Houser, MD, professor, Divisions of General Pediatrics and Adolescent Medicine and Global Health and director of advocacy for the Department of Pediatrics, appeared on many local news shows to raise awareness and offer hope about youth suicide.

Suicide is the third leading cause of death among young people, and numbers are increasing. Between 2007 and 2018, the rate of suicide among young people aged 10 to 24 years increased by 60%. “This week is a good opportunity to raise awareness, educate, and advocate for mental health resources,” Houser said, “because suicide is a serious public health concern that can devastate families and communities.”

Houser noted the establishment of the new national 988 Suicide and Crisis Lifeline in July, which will be an important health resource nationally. Anyone can use it by calling or texting (#988). The new 988 number provides an alternative to the 911, which results in a standard law enforcement response. 988 callers will be connected to a health professional in their own state.

Houser encouraged parents to talk with their children and pay attention to changes in their behavior. She emphasized that families should not be afraid of talking about suicide. “Asking about suicide does not cause someone to suddenly consider it,” she said.